As part of the course in Anthropology of Music, prof. Alessandro Duranti (UCLA, Los Angeles) will hold a lecture on jazz history and aesthetics. The lecture will take place at the Department of Cultural Heritage and Environment, University of Milan (via Noto 8, aula K32), at 16:30.


Alessandro Duranti is Distinguished Professor of Anthropology and former Dean of Social Sciences at UCLA (2009-2016). His research projects have focused on the distinctive role of verbal, visual, and aural communication in political arenas, everyday life, and jazz performance. Theoretically, he has been interested in agency, intentionality, and intersubjectivity, with a special attention given to the tension between plans and improvisation. Methodologically, he has favored participant-observation and audio-visual recordings of spontaneous interaction in Samoa, the US, France, and Italy. His books include The Samoan Fono: A Sociolinguistic Study (Pacific Linguistics Monographs, 1981), Rethinking Context: Language as an Interactive Phenomenon (co-edited with C. Goodwin, Cambridge 1992), From Grammar to Politics: Linguistic Anthropology in a Western Samoan Village (University of California Press, 1994), Linguistic Anthropology (Cambridge University Press, 1997), A Companion to Linguistic Anthropology (Blackwell, 2004), Handbook of Language Socialization (co-edited with E. Ochs and B.B. Schieffelin, Wiley-Blackwell 2012), and The Anthropology of Intentions: Language in a World of Others (Cambridge University Press, 2015). Duranti is co-founder (with Bambi B. Schieffelin) of the journal Pragmatics (formerly IPrA Papers in Pragmatics), former editor of the Journal of Linguistic Anthropology (1999-2001), and past President of the Society of Linguistic Anthropology (1997-1999). In 1999, he received the John Simon Guggenheim Fellowship, the UCLA Alumni Distinguished Teaching Award, and the American Anthropological Association/Mayfield Award for Excellence in Undergraduate Teaching. In 2008 he was elected Fellow of the American Academy of Arts and Sciences.

As part of the course in Ethnomusicology, Prof. Francesca Cassio (Hofstra University, NY) will hold a lecture on the female presence in Indian musical culture and literature. The lecture will take place at the Department of Cultural Heritage and Environment, University of Milan (via Noto 8, aula K02), at 12:30.

Based on iconographic, literary and oral sources, this lecture discusses the repertoires performed by women in private and public settings, from the temple to the court. In particular, the presenter debates the ambiguity of the musical texts, swinging between the categories of sacred and secular music in relation to the context of the performance. The lecture offers a reflection on the impact of gender ideologies on female music makers in North India, ranging from early music to pre-Partition era, with focus on the case study of the medieval poetess Mirabai and the 18th-19th century courtesans’ tradition. The event showcases original audio-visual materials from Prof. Cassio’s archive, and it is enriched with live examples of traditional compositions sung by the presenter. 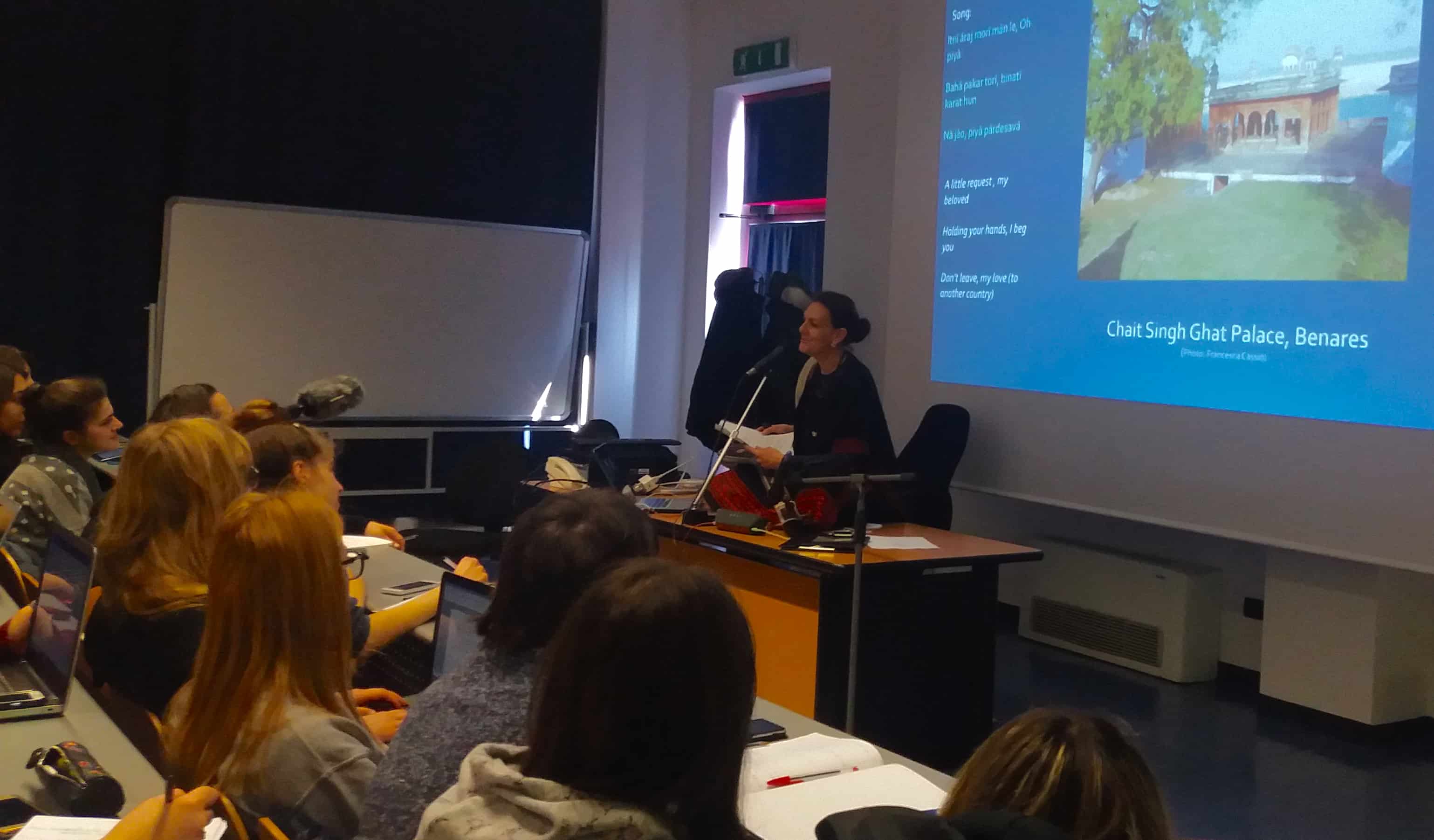 Francesca Cassio is Full Professor of Music at Hofstra University (NY), and since 2011 holds the first endowed chair in Sikh Musicology established in the United States.

Since 1994, Dr. Cassio has conducted extensive research in India, where she lived and has been professionally trained in classical vocal music and in the Sikh kirtan repertoire, according to the Guru-Shishya Parampara (“teacher-student”) tradition.

Accomplished performer and scholar, Dr. Cassio is the author of several publications, including a monograph on dhrupad (Percorsi della voce. Ut Orpheus: Bologna, 2000). In 2015 she was awarded the Stessin Prize for outstanding scholarly publication, with the article “Female Voices in Gurbānī Sangīt and the Role of the Media in Promoting Female Kīrtanīe.”